You are here
Home > Diva's > Alexa Bliss WWE News Channels Her Inner Fiend photos and video online
Nikki Cross is the new number one contender for Bayley’s title but she had to suffer through another strange turn from Alexa Bliss on her way to victory.Action in the SmackDown women’s division is really heating up. Last week, after months of build, the break-up between Bayley and Sasha Banks finally manifested. It didn’t go down the way most would have expected it too, though. Bayley turned on Banks rather than the other way around, and we probably won’t see The Boss again for a while.

That’s because the champ ended the brutal beatdown by wedging her former best friend’s neck in a steel chair and slamming it shut. That makes the prospect of facing Bayley an even more intimidating one than it was before. Never mind the fact she has now been the blue brand’s champ for well over 300 days. 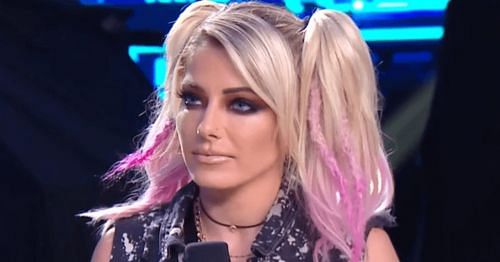 As for who that person will be, that was decided on SmackDown. Nikki Cross, Alexa Bliss, Lacey Evans, and Tamina competed in a match on Friday night for a shot at Bayley at Clash of Champions. While Cross managed to win the match and will get another chance to win singles gold in WWE for the first time, her path to victory was one that included a very worrying hiccup.

Cross and Bliss might be friends, but they aren’t afraid to butt heads when put against each other. However, this was different. While outside the ring, Bliss delivered a Sister Abigail to Cross. That’s right, Bray Wyatt’s devastating finishing move. Not only that but once she was satisfied her work was done, Bliss left the match. Just walked up the ramp and returned to the locker room.

It’s still unclear what exactly WWE has planned for Bliss’s infatuation with Wyatt, or more specifically, The Fiend. It’s probably safe to say he partnership with Cross is irreparable at this point, though. Cross will need to set all that to one side for the next few weeks as she prepares for the biggest match of her career at Clash of Champions, though. If she can’t do that, Bayley’s title reign is destined to continue.