You are here
Home > Diva's > Alexa Bliss WWE Hottest Transformation Rare Photos and video online
For a while, Alexa Bliss couldn’t figure out what her calling was. She enjoyed cheerleading and the world of bodybuilding, though ultimately it was pro wrestling that really sucked her in. Despite no prior experience, Alexa was hired by WWE, largely because of her athletic background. It was actually her persona that shined the brightest earlier on, as she managed to out-stage her former tag team, Blake and Murphy. Once she made it to the main roster, Alexa never looked back becoming a multi-time WWE Women’s Champion.

In this article, we’ll take a look at her many transformations on route to becoming one of the most talked-about females on the roster. Enjoy the article folks and be sure to share it with a friend. Let’s get started!

We start way back in 1991, early August to be exact. Alexa Bliss entered the world, born in Columbus, Ohio.

She went by Alexis Kaufman, still a long way away from the pro wrestling world. Little did she know that wrestling would soon enter a boom period in the decade, with WCW and WWE slugging it out in the rating war.

Still quite the youngster, Alexa grew up under great circumstances, at least in terms of her family life. Her parents were always there for her, even when she struggled to pick a specific career path.

As you’ll see in this article, Bliss made quite a few changes before finally landing on a WWE career path.

She took on several different sports from the age of five. Though she truly fell in love with cheerleading, even at an early age as evidenced by the picture above.

She would pursue cheerleading during her high school and university days. Who knows, maybe Alexa could have made it pro in the NFL had she continued on the journey. We can safely say things worked out for the best, however.

As we eluded to, Bliss was a sporty type growing up. She was shying away from sports, taking a liking for softball, track, kickboxing, and gymnastics.

She entered WWE completely green in terms of in-ring experience, though she definitely had the athletics which enticed WWE.

She was a big gymnastics enthusiast from a young age, which certainly helps when you step foot inside the squared circle.

We can see shades of that experience, especially with some of Alexa’s top rope offense and in-ring agility. Who would have thought the Olympic sport would have paid off in a wrestling ring years later…

They grow up so fast. Especially looking at Alexa’s rise in WWE; she went from a fairy gimmick to the face of the women’s division over on SmackDown.

She’s now back to her old stomping grounds, recently getting traded. Surely, McMahon wants Alexa on his “A” show – we all know Vince is quite high on the multi-time Women’s Champion.

Wrestling wasn’t on the agenda yet, however, Alexa does admit to being hooked at a young age, fascinated by what she was seeing on television.

Don’t tell Sasha Banks that, as according to Sasha, Bliss had limited knowledge of the wrestling business. Banks would make the claim that Alexa couldn’t tell the Hardy Boyz apart… Yikes.

We’re quite surprised WWE didn’t use this as a gimmick – she could’ve fit in perfectly with the likes of the Spirit Squad and heck, she likely could’ve done a far better job than all of those dudes.

Nonetheless, she climbed up the WWE ladder as a heel, which is the complete opposite of her real-life self.

We wonder if she ever hit the Twisted Bliss during her gymnastics days? Who knows, but we do know that Alexa made a great impression on WWE; she earned a contract through a video tryout, believe it or not.

Her mom said it best during a special WWE Network documentary: she was a performer from a very young age. That holds true these days. Alexa’s taking the ring in front of thousands in attendance and millions watching at home.

What a thrill it must’ve been most recently, hosting WrestleMania alongside the likes of Hulk Hogan.

She was almost all grown up in the pic above, heading out to prom. At that point, the future still looked shady as Bliss had several different options – as we stated earlier, her parents got a little worried that she had one too many interests. Thankfully, all those interests paid off when WWE took a look at her resume. 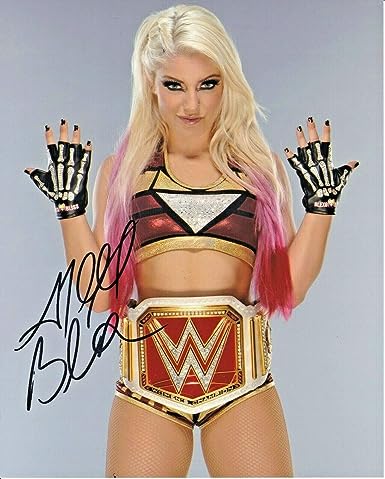 She switched fields later on entering the world of professional bodybuilding. An interest in the field actually might’ve saved Alexa’s life as she struggled with eating habits – the disorder got really out of control. The world of bodybuilding finally introduced her to proper dieting and nutrition.

She joined NXT in 2013; at the point, WWE tinkered with gimmicks behind the scenes. She worked a gimmick backstage alongside Scott Dawson, one that does intrigue us at least a little bit.

Perhaps splitting the two up was the wisest idea, we really can’t picture Bliss alongside Dawson.

A fairy with glitter… that’s how Alexa got her start. Believe it or not, she also worked as a ring announcer briefly before that.

The gimmick wouldn’t stick and she really didn’t make much of an impact under the circumstances. Everything changed when she joined a certain tag team…

This role basically changed everything for Alexa Bliss. We finally got to see her personality shine and soon enough, she became a known presence on NXT television. Alexa would outgrow the tag-team duo and later, debut on the main roster even before Blake and Murphy.

The great part of the WWE draft is the fact that everything is kept a secret, therefore the reactions we saw on television were all genuine, including Alexa Bliss bursting into tears.

Little did she know, it was the start of something special as she got pushed to the top of the SmackDown card really quickly.

She defeated the untouchable Becky Lynch at TLC in a table match, claiming her first-ever Women’s Championship. It was the correct decision as Alexa was extremely over with the audience and she was clearly gaining momentum. Her hot streak would only start to build once she won the title.

3A Moment Of Bliss

We saw the value of Alexa Bliss during her injury. WWE wanted to keep her around so she took on various gigs, including as a replacement GM and later, hosting her own talk show, A Moment Of Bliss. She would carry that momentum into WrestleMania, hosting the show in front of a mammoth crowd.

2Posing With The Hulkster

WrestleMania 35 was a busy night for Alexa Bliss. She took part in various segments, including kick-starting the show alongside Hulk Hogan. In addition, she rocked several different outfits throughout the show – a busy night to say the least.

She entered the first SmackDown on FOX as one half of the Tag Champions. It was quite the experience for Bliss on the blue carpet, though sadly she would drop the belts to Asuka and Kairi Sane shortly after.

We expect Bliss to further develop in 2020 and perhaps, dare we say enjoy another title run?