You are here
Home > Diva's > Mandy Rose Hottest paparazzi WWE Training Rare pictures and video
It started off as an intriguing storyline behind the scenes, as Otis would constantly express his love for Mandy. Wisely, WWE started to use it in storyline, and it has turned into one of the more intriguing scenarios over on SmackDown. Both are being elevated for the story – who knows how it’ll all end up?What we do know, is that Otis can’t keep his eyes off Mandy, and that’s especially true when she’s hitting the gym, something she’s known for given her bodybuilding background prior to WWE. In the following list, we’ll take a look at Mandy pulling a sweat in the gym, hitting anything from a squat, deadlift or even, bicep curl. No matter what the exercise, Otis and likely everyone else just can’t look away!Enjoy folks!

Prior to the workout, Mandy’s getting in a stretch, extending her legs. That’s a great way to engage both her hamstrings and glutes prior to getting started, especially if she plans on hitting a squat day.

Otis can’t look away, even when Mandy’s just getting started and warming up.

They’re best friends on-screen and the same holds true for the duo away from the camera. The two are inseparable, both backstage and on the road.

They always hit up different gyms and, in this instance, they worked out alongside Bradley Martyn. Sonya had a bit of difficulty getting set up on the squat machine – thankfully Mandy was there to help her friend out.

Mandy’s hitting the same machine that Sonya struggled with, except she’s a natural on the squat machine, which targets a lot of the glute muscle as we can see.

Sonya is doing her best to take some notes as this machine isn’t included in all gyms.

The dynamic duo was at it again, this time training alongside Sheamus for the WWE star’s YouTube channel.

The workout was an exhausting one, filled with super-sets and circuits from the start – along with lots of cardio-based drills. They completed the session with some tough bodyweight ab exercises.

Nope, that isn’t a squat – instead, Mandy is hitting up a Good Morning exercise, which is a tough one to pull off properly. If done correctly, it can be a big-time backside builder.

Rose hit the exercise like a true pro and we really aren’t surprised in the slightest, especially given her longevity inside the weight room.

Prior to starting her journey with WWE, Mandy’s training was a little different and more suited to bodybuilding.

That all changed when she signed a WWE deal, her workouts at the PC put a huge focus on both strength and conditioning. That’s evident in the photo above as Mandy hits a deadlift with a chain attachment. 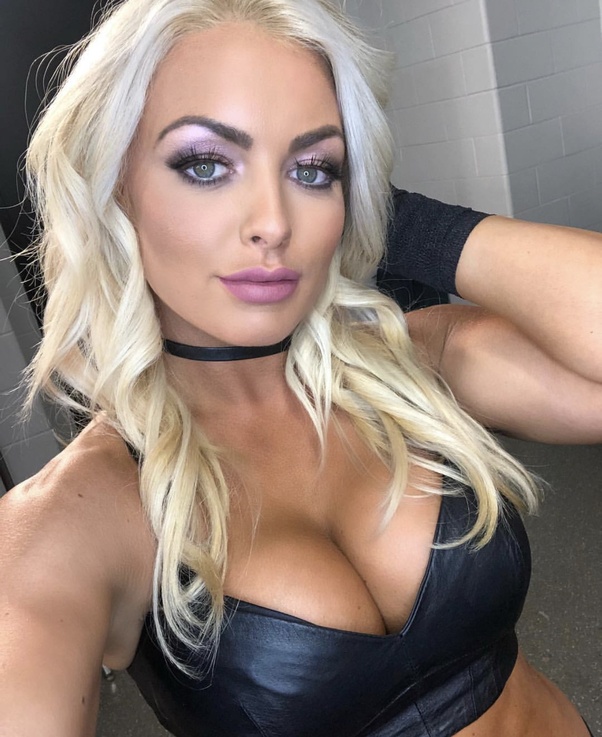 We assume Otis might be drooling over this one, especially given the fact that Mandy hits a bench press movement at the end of her IG post, an exercise Otis thrives on – he put up ridiculous numbers at the PC hitting 225 for some sickening reps.

He likely wishes he was there for a spot.

Mandy’s gym outfits are always on point, that’s for sure. She’s looking sharp in this photo, just finishing up her cardio – which is another big aspect for WWE stars to improve on, especially for the in-ring aspect.

We’ve seen so many newer wrestlers in the past get winded in the ring, cardio must remain high in the gym consistently.

Mandy follows a proper split in the weight room, which features both lower body and upper body days.

In the pic above, she’s building her front delts – pulling off a tough front raise, really working the shoulders with some high rep ranges.

It is an outdoor day for Mandy. We assume Otis wishes he was the mat… or at least somewhere nearby.

Rose pulled off an ab workout outdoors, on the beautiful beach and in the sun. Now that’s a great way to burn some extra calories.

This one was truly a tough workout, even for us just watching at home. It was a big circuit day for Mandy and Sonya, alongside Sheamus. Also involved in the circuit was a cardio drill – they upped the intensity mixing cardio in with some tough upper body movements.

The intensity was kept high while the breaks were quite short and truly lacking.

It was a bicep day for Mandy and her arms look full and pumped. It is just another day for Rose, working out at a different gym.

Since she joined the main roster, Mandy is always at a different gym while on the road, during her NXT days things were a lot easier as the talent normally trained at the PC.

This is something we really don’t see often, a WWE star working out at Planet Fitness, which happens to be one of the most commercial gyms out there.

Nonetheless, finding a gym while on the road can be a challenge at times – and in Mandy’s case, she had to settle for the oftentimes, ridiculed gym.

Once again, she’s taking a page out of Otis’ playbook, hitting up a heavy seated squat. Not only does Mandy hit the exercise, but she does so with pure grace and fine form.

Given that both Mandy and Otis were at the PC at the time, we assume Otis was drooling somewhere in the back.

We can see Mandy’s impressive biceps and delts really popping out in this photo – without a doubt, it was a heavy and tough upper body day – likely filled with strength along with lots of super-sets and circuit training.

Rose really doesn’t believe in off days and it shows as evidenced by not only the pic, but her always improving look on-screen.