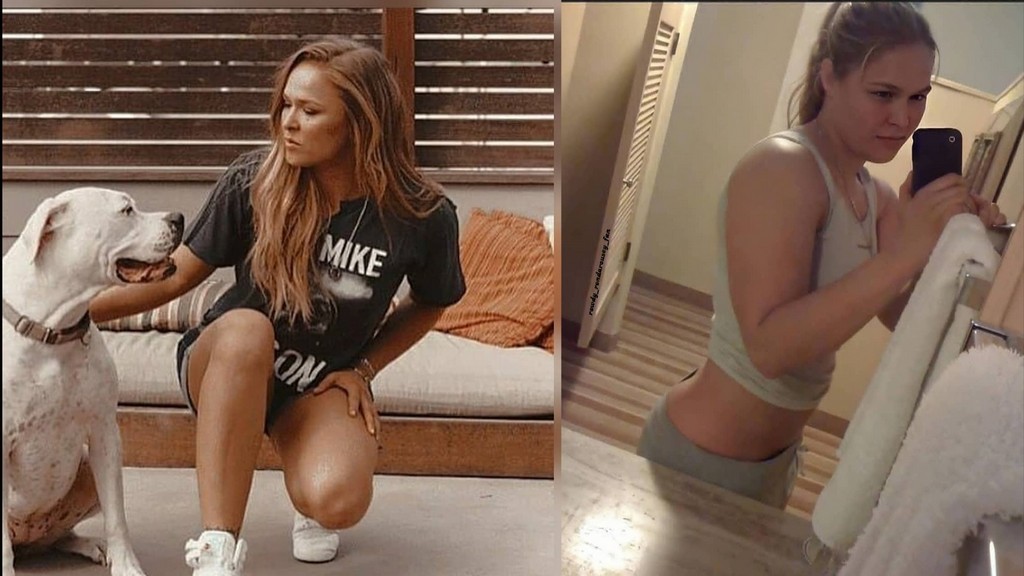 Few can outwork Ronda Rousey. Heck, prior to her WWE debut, she was taking part in four-hour workouts according to ESPN. That’s as much exercise as the norm gets in a week… Rousey packed it all into one day.

Her strong work ethic started a long time ago. Since the age of 11, Rousey started with judo and would continue on from there. Obviously, joining MMA changed everything for Rousey, as she became a legend in the sport.

In this article, we’ll take a look at her hard work in the gym when nobody is watching. Rousey’s husband doesn’t want us to stare too intensely, as some of the photos below are pretty darn steamy as well. Enjoy the article and like always, be sure to share it with a friend. Let’s get started.

This takes some serious core strength. Rousey has both strength and balance to pull off this movement as she pulls a deadlift with the dumbbells while keeping focus.

This was all part of a shoot taken by the former UFC star. Few have a work ethic like Rousey’s.

14Band Stretching At The PC

She’s not in the octagon in the picture above. She’s in her new home with the WWE. This was a throwback photo on the road to her first match with the new company.

Rousey blew fans away with her match at WrestleMania, it created a serious buzz. The bout ultimately stole the show at the biggest event of the year – not a bad debut.

She takes a breather during her training session in the picture above.

Rarely does Rousey get outworked by anyone, heck during her WWE training on the road to WrestleMania, she took part in 4-hour long sessions if you can believe, as evidenced by ESPN. Good luck trying to top that.

Rousey took time out of her busy schedule setting up a brief sparring session with the celeb. Rousey played the role of mentor, teaching her some new moves.

She needed all that flexibility, especially to avoid any kind of stiffness. The harder you work in the gym, the more the soreness tends to develop over time.

Especially when it comes to a run with WWE, the wrestlers must stay loose and flexible in order to perform at a high standard.

It is all because of habits like the one above that Rousey would grow into one of the best MMA fighters of all-time. She started judo at the age of 11 and shortly after, she competed at the Olympic level.

Making the jump to MMA changed everything for Ronda.

Rousey’s living that LA life and she knows more than anyone else that living in the area comes with a lot of attention, especially by the paparazzi.

She stopped by an LA gym but of course, the photographers needed to snap every possible picture of the former MMA star in her element.

We admire Ronda’s WWE debut and run. She didn’t want it to be a one-off match, nor did she want to be below average like so many others in the past.

From the very beginning, Rousey wanted to thrive from her first match all the way till her final bout a year later. We can safely say she conquered that frontier, blowing WWE fans away with how fast she caught on.

7Getting In The Zone

Her childhood wasn’t the easiest. Being involved in martial arts at such a young age, Rousey was ridiculed by her peers.

It was tough to deal with though, as she grew older and wiser, Rousey began to embrace her way of life and look. It all came together for Rousey at the right time.

It was all going Rousey’s way till the fight with Holly Holm, arguably the match that changed everything for Ronda Rousey.

The knockout literally put her into retirement as she was never the same again; her confidence clearly took a hit and that was evident in the following match against Amanda Nunes.

Following the Nunes defeat, Rousey fell in a big depression. She appeared on Ellen detailing her hard times following the defeats. Rousey felt like an embarrassment; things got very dark for the former UFC Champion.

She didn’t take the defeats lightly but thankfully, she was able to find a new passion in WWE shortly after.

Losing Rousey was hard for the UFC as she turned into one of the biggest draws in the sport. We don’t know if she’ll ever return.

Heck given her age, a comeback isn’t out of the question – we just don’t know if Rousey’s in that head-space anymore, especially since joining WWE.

Speaking of WWE, Rousey’s putting in the work with this throwback workout shot. She was in full focus mode, improving on her strength endurance with such exercises. We still can’t imagine training for four hours, most of us are completely spent after 20 minutes… try a four-hour long session.

We’re not sure what the future holds for Ronda Rousey. At the moment, she’s saying that starting a family is the biggest priority, however this could be Rousey’s way of fooling the WWE Universe.

Rumor mills indicate that she might return in 2020, perhaps taking on Becky Lynch in a WrestleMania main event.

Along with success in WWE and MMA, Rousey also thrived with modeling work.

Her SI pictorials sold like hotcakes. She can be mean in the ring and inside the octagon, though she also has a soft and stunning side as well. In truth, she has one of the best smiles out there. Hilariously, she also has a scary angry face.