Seth Rollins may be determined and extremely tough, but he might not be the sharpest tool in the shed. On this week’s episode of WWE RAW, Seth Rollins made his way to the ring to try and assault the perpetrator of his last week’s sufferings — the Universal Champion, Brock Lesnar.

Unfortunately for him, he was still bearing the wounds of his battle against Lesnar from the previous week and found himself in even more trouble this week once The Beast Incarnate was done with him.

In case you didn’t know…

Seth Rollins was involved in a match against Dolph Ziggler last week when he was assaulted by Brock Lesnar. The Beast Incarnate held nothing back as he inflicted Seth Rollins with immense pain. He hit him with a German Suplex inside the ring, and when Rollins rolled to the outside, he followed him there.

He hit him with an F5 against the ring post, before then decimating him by hitting him with three F5’s on a steel chair he had set up for the purpose in the middle of the ring.

He was not done even then, and followed Rollins out to the ambulance and dragged him out on his stretcher. He finally ended his assault on the Architect by hitting him with an F-5 on top of the stretcher.

The heart of the matter

Seth Rollins came out to interrupt Brock Lesnar and Paul Heyman, but he would regret it. He had brought a steel chair, but it did not help him.

Lesnar avoided the chair swings and took him to town, slamming him into the Turnbuckles damanging his already injured ribs. He hit Rollins with shots to the ribs and knees which were difficult to watch, before hitting an F5. He would hit another F5 during the commercial before leaving Rollins lying in the middle of the ring.

After his trial was over, Seth sat tired and said that the question had crossed his mind if all that he was suffering was actually worth it or not.

I’ll be at #SummerSlam. And I’ll beat @BrockLesnar.” @WWERollins is NOT giving up his hope of reclaiming the #UniversalTitle. #Raw 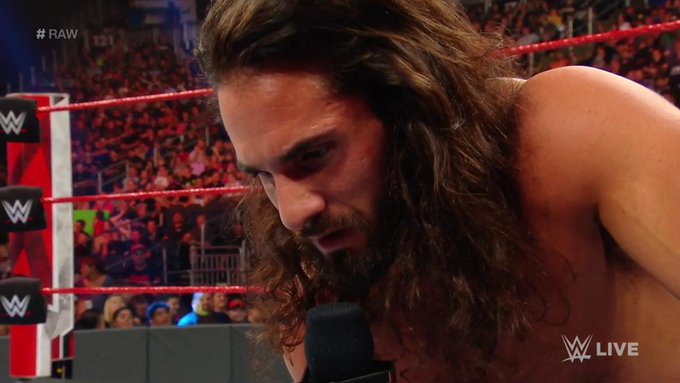 772 people are talking about this

He then said that he had decided that it was definitely worth it and he would be at SummerSlam to defeat Brock Lesnar to win back the Universal Championship.

Seth Rollins will be facing Brock Lesnar for the WWE Universal Championship this Sunday at SummerSlam. It remains to be seen if he will be actually cleared after the punishment he has suffered at the hands of Brock Lesnar.