In an unexpected twist to the Roman Reigns and Shane McMahon storyline, The Undertakerappeared to save “The Big Dog” from a two-on-one attack on Monday Night RAW.

While Reigns tried to fend off both Shane and Drew McIntyre in a handicap match, the two would overwhelm the former Universal Champion and hit him with multiple finishers. Shane would hit Roman with a Spear, while Drew hits two Claymores. McMahon would go to the top rope to prepare for a Coast to Coast when the Undertaker’s iconic gong hits while the lights go dark.

When the lights come back up, Undertaker appears in the ring and chokeslams Shane McMahon. Drew tries to take out the Undertaker, but “The Deadman” throws him out of the ring.

Once Shane and Drew are on the apron, Undertaker helps Roman Reigns up to end the segment. Take a look at The Undertaker’s return below.

The Undertaker was last seen facing off against Goldberg in the main event of the Super Showdown event in Saudi Arabia.

Undertaker has history with both Roman and Shane. Roman and Undertaker faced off at WrestleMania 33 after “The Big Dog” eliminated Undertaker at that year’s Royal Rumble. It seemed like Undertaker’s retirement, but he would return for matches in Saudi Arabia against the likes of Goldberg, Triple H and Shawn Michaels.

When Shane McMahon returned to the WWE in 2016, he would face The Undertaker in a Hell in a Cell match for control of Monday Night RAW. While Undertaker would win, Mr. McMahon would give Shane control of the show anyways.

With the Extreme Rules pay-per-view coming up in July, this could be setting up a tag team match between the four men.

The only match confirmed for Extreme Rules is a mixed tag match between Seth Rollins and Becky Lynch vs Lacey Evans and Baron Corbin. The winner of that match will win the Universal and RAW Women’s Championships.

What do you think of the return of The Undertaker? Let us know your thoughts in the comments section below. 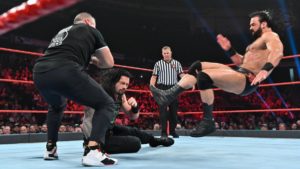 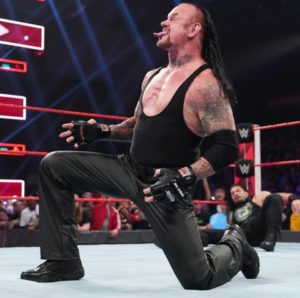