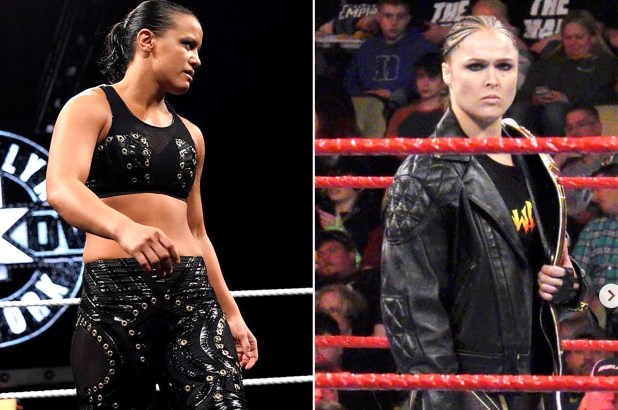 And so it begins again.

The journey to WrestleMania 36 in Tampa officially gets underway with the Royal Rumble pay-per-view at Minute Maid Park, home of the Houston Astros, on Sunday (preshow, 5 p.m; main card, 7 p.m., WWE Network).

This year’s Royal Rumble could provide us with new champions with five belts at stake, plenty of surprises — returns from Edge, Ronda Rousey, Naomi and Nia Jax are not out of the question — and a clear direction for the next two-plus months of creative around the Rumble winners. Will they be new stars, such as Drew McIntyre and Shayna Baszler, or represent a rebirth of the old guard in Roman Reigns and Charlotte Flair?

Daniel Bryan will try to win the Universal championship from “The Fiend” Bray Wyatt in a strap match. The stipulation came out of nowhere after The Fiend disappeared through a hole in the ring to get away from Bryan, who doesn’t want him to slip away again.

This is a rematch — likely to take place under The Fiend’s signature red lights — of a bout at Survivor Series won by The Fiend and a feud that harkens back to Bryan turning on the Wyatt Family in 2014. The Fiend has “changed” Bryan from a long-haired, bearded heel to this short-haired, clean-shaven babyface who has reignited the Yes Movement.

It’s the power of that movement and Bryan’s past triumphs as an underdog that make it believable he could find a way to beat the monster. Ramblin’ Rabbit, The Fiend’s Firefly Funhouse friend, said Wyatt has a weakness. It makes The Fiend losing all that less improbable.

Either way, WWE is backed into a bit of a corner here. Do you pull the plug early on the invincibility of The Fiend, the company’s hottest act and a huge merchandise seller, or make Bryan’s transformation feel a little less meaningful with another defeat?

The Man vs. The Mist

Asuka is one of the greatest threats to Becky Lynch’s Raw women’s championship since Lynch won the belt in the main event of last year’s WrestleMania. The storyline of Asuka being the obstacle Lynch has yet to overcome continues to reestablish one half of the WWE women’s tag team champions as a true badass.

This has lit a fire under Lynch, who cut one of her better promos in months after getting hit with Asuka’s green mist. Though it’s unlikely WWE takes the championship away from Lynch before WrestleMania, Asuka’s mystique, the mist and potential interference from Sane means a flip-flop of the titles over a two-match span isn’t impossible.

Yep, we are still doing this. The Roman Reigns-King Corbin feud has been going on for four months, and this will be their fourth televised singles match during that time — none of which has been memorable. This one will be a falls-count-anywhere match that has to be better than the pure wrestling matches these two have tried to put on.

True, the battle lines are a little different with The Usos having their cousin Reigns’ back against Corbin and his henchmen Robert Roode and Dolph Ziggler, but this feels like storyline-building for the Rumble match later in the night in which both men are scheduled to compete. Let’s hope Reigns moves on to bigger and better things soon — maybe starting with a Rumble win, overcoming the fatigue against the odds.

The women’s Royal Rumble appeared pretty cut and dry before the NXT show on Wednesday, when Shayna Baszler said she would stay in the brand and wanted a rematch with Rhea Ripley for the championship.

Baszler remains the clear front-runner because WWE put so much into the Queen of Spades by having her beat Lynch and SmackDown women’s champion Bayley at Survivor Series. If Baszler doesn’t win the Rumble, it feels like you are wasting that. She has a legitimate reason to fight either champion. Baszler has already tapped out Bayley, who faces Lacey Evans on Sunday, or she could want to beat The Man and get revenge against Lynch for pinning her friend Rousey at WrestleMania 35.

Few superstars outside of “The Queen” Charlotte Flair have even talked about the Royal Rumble match on WWE TV, so it makes you think our winner will be someone we haven’t seen in the buildup.

One of those possibilities is a returning Naomi. The Usos, including her husband Jimmy, recently came back, and Naomi has been out since July. She’d make for a cool opponent for heel Bayley. Jax and Ruby Riott are both potential injury returnees. Or does Rousey show up for the first time since losing at WrestleMania to get her shot at Lynch?

The men’s Rumble match is a fascinating piece of business because of WWE champion Brock Lesnar’s presence as entrant No. 1 and because of the push NXT got at Survivor Series.

There are multiple cool potential showdowns for Lesnar. From NXT alone, you have Lesnar antagonist Matt Riddle, Keith Lee, WALTER, Tommaso Chiampa, Adam Cole or a possibly returning Velveteen Dream. R-Truth also has a potential moment with The Beast set up from their Raw encounter.

Does Cain Velasquez get a chance to confront Lesnar after his quick loss at Crown Jewel? Does Edge return amid persistent rumors he has been cleared to return to action? Or does Lesnar go through 29 other men and win the thing? Then what?

The other major storyline entering this match is Drew McIntyre finally fulfilling Vince McMahon’s prophecy of being a future world champion. The Scotsman has been getting a push and a character makeover, and has a great backstory to tell. The audience has been ready for McIntyre to ascend for a while. WWE just signed a television deal with BT Sports in the UK, so having a prominent star from that area in a top spot is good business.

In addition, a while back on SmackDown, Reigns told Bryan he planned on winning the Royal Rumble and facing him at WrestleMania for the Universal Championship. That could pay off with a singles program between two big stars that never happened last year after Bryan’s friend Erick Rowan attacked Reigns multiple times.